Jezebel recently posted a video clip from the Jimmy Kimmel show, under the premise that it's an entertaining watch. Kimmel challenged his fans to pull a Christmas prank on their kids, to give them undesirable early presents and film their disappointed reactions.
The video clip contains a montage of various fans' videos, all with kids tearing open beautifully wrapped presents only to drop their jaws in confusion and disappointment. Kids reacted to receiving such "gifts" as a Tupperware with a half-eaten sandwich, a battery, and an onion.
Now, much of this footage is adorable and chuckle-worthy. But not every kid received such gender-neutral bad presents. Some of the kids were little boys whose parents got them "girl" gifts, and if you watch the video with idealized gender roles in mind, you can see that in the cases where the intentionally terrible present was based around gifts of the "wrong" gender, the boys' reactions raise some truly troubling questions about how early children learn sexist attitudes.
To see what I mean, you first have to watch the video.
LINK TO KIMMEL CLIP ON JEZEBEL
Now, this thing starts out amusing. When the children eagerly tear open the packages, only to find ridiculous items housed inside, they clearly struggle with feeling disappointed and trying to mask that disappointment because their parents are telling them to be excited. Anyone who works with young people knows the amusement that comes with watching little faces work out emotions bigger and more grown-up than they are: are they serious? Should I be honest and show that I hate it, or should I pretend to like it? (spoiler alert, kids: you're still going to be asking yourselves that as an adult). Also endearing is how you can see it gradually dawning on the kids that their parents are messing with them, and those moments are very playful and cute. The exchange between the mom behind the camera and the little girl getting a half-eaten sandwich in a tupperware container! The one little girl's pouty reaction to her mom saying "I thought you loved my cooking, so I made you this!" is downright adorable.
But reconsider some of the reactions given by little boys whose gag gift was "for girls." In these scenarios, the joke stems not from the unexpected status of the gift (that it's rotten, half-eaten or already used up), but rather, from the fact that the gift violates gender norms (that it's the "wrong" kind of gift.)
The boy who got a girls' sticker book: 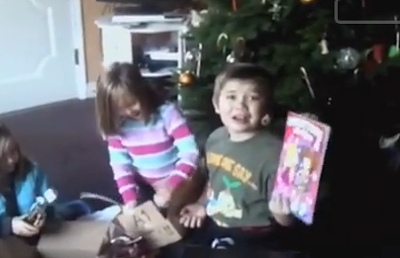 This was the first reaction in the series where the kid got openly angry. He's not just frustrated and dealing with disappointment. He's panicked and yelling at his parents. "I got a girls' activity book with stickers!" he cries plaintively. "I'm not a girl!" His little sisters got boys' gifts, and they sadly chime in "I'm not a boy eidder" (ok, the lisp is adorable), but their reaction is not as defensive or extreme as the boy's. The clip ends with the boy beginning to cry. "This is the worst Christmas ever," he says, sounding heartbroken.
The shrill panic of this boy at receiving a girl gift made me recall a fact from Still Failing at Fairness, a book about research conducted in public schools on sexism in education. The authors of this research found (often unintentional) gender inequality both in curriculum and in the way teachers facilitated discussion, again and again, all across America.* One study they did really stayed with me in particular. They surveyed almost 1100 hundred middle-school age students in Michigan with the question "Suppose you woke up tomorrow and found you were a member of the other sex. How would your life be different?" (112).
While a large portion of the girls surveyed thought being a boy could give them some advantages, 95% of the boys surveyed "saw no advantage at all to being female." Most startlingly, 16% of those boys said that if they did wake up to find they'd changed into girls, they would kill themselves.
Quotes from the students surveyed:
"I would kill myself right away by setting myself on fire so no one knew."
"I'd wet the bed, then I'd throw up. I'd probably go crazy and kill myself."
"And I would never wake up again and would head over to the cemetery right now and start digging."
"If I woke up tomorrow as a girl, I would stab myself in the heart fifty times with a dull butter knife. If I were still alive, I would run in front of a huge semi in eighteenth gear and have my brains mashed to Jell-O. That would do it."
"If I was a girl, I would scream. I would duck behind corners so no one would see me."
"I would hide and never go out until after dark."
"If I turned into a girl today, I would kill myself."
(112-3).
Were these particular respondents being melodramatic? Maybe. But the numbers show that by middle school, these students had all picked up the message that the idea of a girl becoming a boy is no big deal, but the idea of a boy transformed to a girl is "appalling, disgusting, and humiliating; it was completely unacceptable" (113). The idea of becoming a girl panicked the male students, made them say fearful and desperate and contemptuous things about what it means to be a girl.
And when the little boys in the Kimmel clip receive girl gifts, their reactions encapsulate this desperate panic, this utter contempt for being given a gift of the "wrong" gender. Their reactions reveal that the girl item is not a gift to them, but a challenge.
Watch the rest of the video. Watch the reactions of the little boys who get girl presents. Watch how the boys who get girl gifts seem to take extra offense, how they seem to already know, at such a young age, that to be given a "girl" gift is a terrible insult.
The boy who got a sparkly costume:
"You stinking parents!" (flounces over to the camera and pushes the costume at the parent) "Take it back! I want a refund!" 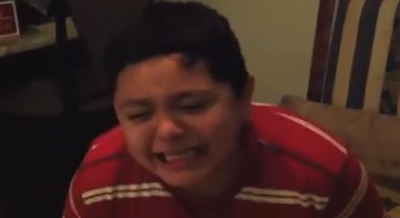 Then later, we see this same kid again, crying and pointing his fingers at the parent/camera:
"[Santa's] putting you on the naughty list!" When the parent asks why, the kid sobs "because you gave me a stupid Hello Kitty gift!!" and hides his face in his hands. And then the same kid appears again, throwing a tantrum and still hysterically sobbing: "you stupid parents! I hate you! I hate you all!"
We see a third boy, who got a pink sparkly pony and shrieks "I got PONIES? I got PONIES?!?! I don't want ponies, they're for girls!" We then see the boy with his chin on his fist, defeatedly saying "this is the worst Christmas I ever had." 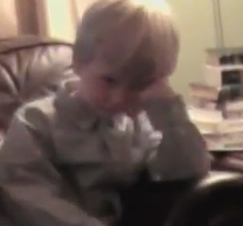 Sure, all of the kids were disappointed, and some of them were upset and angry. One kid flings his gift, across the room, saying "that's not what I wanted." Another pouts at the dinner table, saying he's sure Santa would never have brought him a potato. But the only ones who say it's the worst Christmas ever are the ones distressed by girly gifts. Many of the kids objected to the gifts themselves, but these young men objected to them because they were "for girls." The girl doesn't want the sandwich because it's half-eaten and gross, but the boy doesn't want the sticker book because it's for girls, because he's internalized how wrong his world thinks it is for a boy to be associated with anything girly.
So what am I trying to say by reading these kids' reactions in light of Still Failing at Fairness? Not that these kids are sexist, or that these families are sexist, or that the Jimmy Kimmel show is sexist (although the way the montage ends, with a clip of a kid saying "tell Jimmy Kimmel he can suck my balls" speaks volumes about how the show defines "funny." What do you expect from the guy who did The Man Show?). I'm saying that the extreme desperation with which little boys want not to get girl gifts reflects how early and often the society they live in gives them the message that girls are inferior, and that to be called a girl, even in as subtle an implication as being given a girl gift, is wrong. These kids are so young, and I'm sure they couldn't articulate why, but even at that young age they already know that to be given a girl gift as a boy in our society is an offense of the highest and most hard-hitting order.
And you might be thinking that I'm reading too much into this. Many people do. And maybe I am. Then again, many people don't think about how even the smallest and most seemingly inconsequential of messages about the value we place on normative gender roles isn't isolated, but rather, the latest small incident in a never-ending stream of small messages that accumulate into big, over-arching messages. As a literary scholar, I know there's depth to be gleaned from even the briefest of textual excerpts, and as an amateur sociologist, I believe we can observe the system through the individual. Every small individual reaction like the ones mentioned in this piece reflects a larger climate in which the media, peers, parents, teachers and society in general send the message to young people that to be called a girl, even in subtle implication, is deeply humiliating -- whether they mean to send this message or not. And implicit in that message is another idea, namely that girls and women are inferior to men (this inequality being the source of the humiliation). Kids grow into these messages, accept them as status quo. This normalization of inequality is the reason why, even in today's supposedly liberal society, women still earn about 30% less than men at every level of education.**
And so I challenge you, dear reader, to replicate the experiment with the young people in your life. Ask them: if you woke up tomorrow as the opposite gender, how might your life be different? If their answers are in line with those from Still Failing at Fairness and the boys getting girl gifts in the Kimmel clip, think about how no one's probably telling them explicitly that girls are inferior, and how even without that explicit instruction, they're still getting that message, anyway. Ask yourself how a child so young could already believe so vehemently that such inequality is natural, and how you might deflect the messages of inequality they're absorbing and help them see being a girl's not so bad after all.
*Sadker, David & Myra and Karen Zittleman. Still Failing At Fairness: How Gender Bias Cheats Girls and Boys in School and What We Can Do About It. 2nd ed. New York: Simon & Schuster, 2009.
**According to SFaF, female high school graduates earn 34 percent less than their male counterparts, women with bachelor's degrees earn 31 percent less than their male counterparts, women with master's degrees earn 32 percent less than men with the same degrees, and women with doctorates earn 29 percent (or $22,824) than men. In general, "women who work full-time and year round earn on the average 77 cents for every dollar men earn" (25). And this is from research conducted in 2009, so it's very recent.
Posted by Mare at 10:27 PM